Until April 29, 2017, the public Nicholas Roerich Museum of the International Centre of the Roerichs was located in the heart of Moscow, on the grounds of the historical Lopukhin Estate. It bore little resemblance to other art museums and galleries. Its history and fate are as unique and extraordinary as the life of the man after whose name it is named.

The founders of the International Centre of the Roerichs, the basis of which became the public Nicholas Roerich Museum, were:

Svetoslav Roerich (1904-1993), an outstanding artist, scientist and public figure, citizen of India. Svetoslav Roerich painted amazing portraits of Nicholas and Elena Roerich, portraits of Nehru, depicted the life of ordinary Indian inhabitants. His artistic skills were brought to high perfection. His pictures found a worthy place in the treasury of masterpieces of World Art.

Yuli Mikhailovich Vorontsov (1929-2007), Extraordinary and Plenipotentiary Ambassador, special Representative of the UN Secretary-General for the CIS countries, President of the International Center of the Roerichs. Ambassador of the USSR (and later the Russian Federation) in India, France and the United States. A man of high morals and a brilliant professional, a true gentleman, radiating an inherent nobility, diplomat by the grace of God.

Boris Ilyich Bulochnik. Thanks to the help of Boris Ilyich Bulochnik the collection of paintings of the Museum by name of N.K. Roerich have been enlarged with new canvases. With his support, publishing activities of the ICR had been actively developed. The selfless activities of the President of “Master-Bank” B.I. Bulochnik, who dedicated much of his life and his capabilities to serve Culture, was awarded commemorative medals established by ICR.

The creation of the Museum as a public cultural centre was related to Sviatoslav Nikolaevich Roerich’s vision of culture. It was the considerable independence in using new approaches, the possibility of wide cultural initiative and diverse cooperation with the international community over the departmental barriers that made it possible to create in Russia a unique spiritual and cultural centre for preservation, development and popularisation of philosophical and artistic heritage of the Roerich family. As S.N. Roerich foresaw, public initiative led to the creation of a unique cultural centre – the Museum of the 21st Century, which is the generation of new times and new cultural and historical challenges. 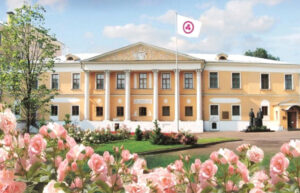 Lopukhin Estate (XVII-XIX centuries), the main house of which hosted the Nicholas Roerich Museum, the reconstructed “Red” Porch (XVII century) and the memorial sculptural complex of the Roerich family turned the Museum into a true architectural and artistic ensemble of the Russian capital, restored from the ruins and lovingly restored. All of the work was done with the help of patrons and numerous friends of the Museum without any state funding, which confirms the viability and effectiveness of the public form of cultural organization.

The contents of the Museum comprised the invaluable cultural heritage of the Roerichs, which Svyatoslav Roerich donated to the Soviet Roerich Foundation (now the International Centre of the Roerichs) in 1990. Central to the Roerichs’ heritage is a new cosmic world view, Living Ethics, which reveals the concept of a close relationship between man and the cosmos; it contains knowledge that helps to understand the peculiarities of the coming evolutionary stage in the development of mankind. Read more about the public Nicholas Roerich Museum: Museum Fund. Catalogue of paintings.

The museum exhibition, developed by Lyudmila Shaposhnikova, Director General of the Nicholas Roerich Museum, reflected the key stages in the life and creative path of the Roerich family members and introduced visitors to their truly selfless work.

The paintings of Nicholas and Svyatoslav Roerich are a boundless and majestic world of the Beautiful. Various relics, gifts from the Spiritual Teacher of the Roerichs, manuscripts and art rarities, books and monographs from the Roerichs’ Memorial Library; personal items and objects that accompanied them on their long journeys; photographic documents and a collection of ancient bronze from the Indian Kullu Valley – all this and much more was on display at the Nicholas Roerich Museum. Thanks to patrons, the museum exposition was constantly enriched with new items, including priceless paintings by the Roerichs.

A vast collection of Nicholas Roerich’s hand-made Himalayan studies was a distinctive feature of the Museum’s art collection. These sketches were the basis for travelling exhibitions all over Russia and abroad. The distinctive peculiarity of the Nicholas Roerich Museum is its multifaceted cultural and scientific activities which go far beyond the limits of the traditional museum work. The halls of the Museum hosted annual international conferences with the participation of prominent scientists and public figures, exhibitions of modern cosmic artists, classical music concerts, lectures attended by leading representatives of science and experts in the field of philosophy, history, culture and education, children’s drawing competitions, festivals of ethnic culture, exhibitions of folk crafts and creative evenings. At the same time, the Museum has actively cooperated with many cultural state and public organisations, including international ones.

In April 2017, the exhibition of the public Nicholas Roerich Museum was barbarically destroyed, the Roerichs’ heritage, which was given by Svyatoslav Roerich to a public organisation, was illegally seized by the State Museum of the East with the full support of the Russian Ministry of Culture. The Russian courts deny the International Centre of the Roerichs the right to defend its rights and practically ignore all documents related to Roerichs’ heritage. You can see the exhibition of the public Nicholas Roerich Museum, which operated at Lopukhin Estate until May 2017, through a virtual tour.

Marga Kutsarova, international lawyer, head of the International Centre of the Roerichs’s branch in Bulgaria,
Chairwoman of the National Roerich Society in Bulgaria

Presentation at the International Scientific and Public Conference “We are rich in love of the Motherland” (for the 115th anniversary of the birth of Yuri Roerich)
October 9-10, 2017

About the situation around the Nicholas Roerich Museum of the ICR in the light of international standards, international experience and traditions concerning public museums

Article was published on the website of the International Centre of the Roerichs on September 4, 2016