In 1989, a letter by Svyatoslav Roerich, a well-known artist and public figure, was published in the “Sovetskaya Kultura” newspaper under the title “No delay!” (June 29, 1989). Svyatoslav Roerich proposed to create a public centre-museum named after Nicholas Konstantinovich Roerich in the Russian capital. 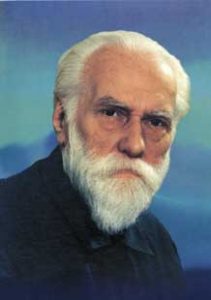 The Council of Ministers of the USSR supported the initiative of Svyatoslav Roerich. In October 1989, the Soviet Roerich Foundation (SRF) was established in Moscow – according to the decree of the USSR Council of Ministers №950 from 04.11.1989. After the collapse of the USSR, the Foundation was transformed by initiative of Svyatoslav Roerich into the International Roerich Centre, whose honorary president he remained till the end of his life. By decree No.2248 of the Moscow Government as of 28.11.1989 the historical Lopukhin Estate in the centre of Moscow was handed over to the SRF. The estate was chosen by Svyatoslav Roerich himself out of a number of buildings offered to him for the creation and housing there of a public museum. The main building of the estate, intended to house the Nicholas Roerich Museum, was at the time in a state of disrepair. 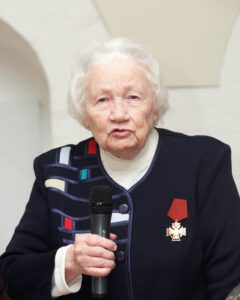 Lyudmila Shaposhnikova was proposed as director of Svyatoslav Roerich’s Centre-Museum. He wrote: “For my part, I see no better candidate than Lyudmila Vasilievna Shaposhnikova, an Indologist and writer, a businessperson who has long been involved in these problems and who I personally know well and for a long time.

In 1990, Svyatoslav Nikolaevich handed over to the Soviet Roerich Foundation, through his trustee Lyudmila Vasilievna Shaposhnikova, the artistic and cultural heritage of his parents – Nicholas Konstantinovich and Elena Ivanovna Roerich. Paintings, archives, personal belongings, relics, and the family library were sent from India to Moscow by special flight. All this, according to Svyatoslav Nikolayevich’s mind, was to become the content of the future public Nicholas Roerich Museum for the development of its scientific, educational and cultural activity.

The government promised to provide all possible assistance to the creation of the public Museum. Unfortunately, the ICR was subsequently denied the promised state support.

In his letter “No delay!” Svyatoslav Nikolaevich wrote: «“I am absolutely convinced that the Centre-Museum can be located only in Moscow. In this connection, the question arises reasonably about the status of the Centre-Museum, under whose auspices it should be and on what means it should exist. As I have already told you, subordinating the Centre to the Ministry of Culture, not to mention the Museum of Oriental Art, would lead to unjustified, in my opinion, limitations the of Centre’s aims and possibilities. The Centre should, in my opinion, have significant independence, flexibility, possibility to function beyond departmental barriers and use new, unconventional approaches, directly contacting the international community. The Centre is the emergence of new times, new challenges, and it seems necessary to take into account the experience of other organizations that have emerged in the Soviet Union in recent times and use this experience for the benefit of the new endeavor. The essence of the concept of the Centre-Museum is that its most optimal functioning could be in the status of a public organization (similar to the Children’s Foundation)”.

Lopukhin Estate, where the public Museum was located in the centre of Moscow, was restored literally from the ruins by the efforts of the ICR without any financial support from the state, thus only thanks to public donations and the efforts of patrons of the arts. Ludmila Shaposhnikova, First Vice-President of the International Centre of the Roerichs, General Director of the Nicholas Roerich Museum, was awarded the Russian Federation National Cultural Heritage Award in 2007, and the European Union “Cultural Heritage Award”, and in 2010 – EU Cultural Heritage Award for her selfless contribution to cultural heritage preservation.

Lyudmila Shaposhnikova was given state awards of the Russian Federation – the Order of Friendship (2006)  and the “Order of Merit to the Fatherland” 4th degree (2011) for special merits in preservation of Roerich’s heritage and development of museology).

Documents and letters of Svyatoslav Roerich