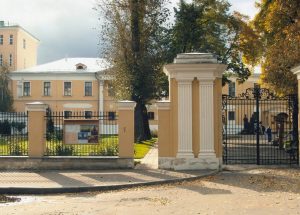 That was the question I asked myself after it became known how it was decided to perpetuate the memory of the legendary figure of Russian culture, long-term director, and the president of the Pushkin Museum, Irina Alexandrovna Antonova.

Most likely, the museum management decided to create and place an exposition dedicated to Irina Alexandrovna’s life and work in the building of the former Lopukhins’ estate following discussions with the Ministry of Culture. At first glance, it may seem that this is a great decision. However, what seems to be honour is, in fact, a sophisticated mockery as every person who is interested in the life of Russian culture is aware of the high-profile events associated with the above-mentioned estate.

They know that this building belonged to the public museum named after Nicholas Roerich for almost a quarter of a century. It is known that the estate was in a dilapidated state at the time of the USSR’s collapse. It was restored brilliantly by the public without any budgetary investments in the 90s. But – most importantly – Svetoslav Roerich received the building for the organization of this museum under the guarantees of the supreme power, and only under these guarantees, he donated the most valuable family heritage to the International Centre of the Roerichs – hundreds of paintings, archives and many objects of art. The Lopukhins’ estate was the jewel of Moscow museums for years until this historical place turned into a crime scene. The estate was seized by Ministry of Culture employees and unknown security forces in violation of the Russian Federation laws on the night of April 29-30, 2017. As a result of the seizure, the public museum was destroyed in the literal sense of the word.

When the modern and expensive museum equipment was destroyed under the Ministry of Culture employees’ supervision, Vladimir Medinsky, the head of the institution, solemnly promised to build a worthy State Museum of the Roerichs instead of the public museum. However, they opened such a pathetic state museum that it was quickly closed down, while the long-suffering estate was given to the Pushkin Museum. The building had to be adapted for something urgently – and it was adapted for a youth center.

While the Ministry of Culture was incessantly carrying out all these reorganizations, the International Centre of the Roerichs kept fighting for the public museum of the Roerichs restoration in the Lopukhins’ estate and pursued the implementation of the guarantees given to S.N. Roerich. Since that memorable April night when armed people arrived at the public museum, volunteers from various Roerich communities and non-governmental organizations dealing with cultural issues keep their watch around the estate 24 hours a day. This voluntary watch lasts for three and a half years (!) and continues to this day.

Even such a small excursion into the history of the Lopukhins’ estate shows that it is the location of an unresolved sharp conflict. Moreover, it is the scene of a direct crime against culture. They want to cover up obvious vandalism, for which no one has yet been brought to justice, with the memory of such a distinguished person as Irina Antonova. So, the question is: if Irina Antonova had become aware of such an honour during her lifetime, how would she have reacted to it?

In most cases, officials do not back down from a decision once made. And it is difficult to say now what should be done to return the estate to its legitimate owner – the Roerichs’ public museum. I assume that two lives, legacies, and memories – Irina Antonova and Nicholas Roerich – will be on the scales after the planned exhibition opening. Do you think Irina Antonova would have wanted such perpetuation? Alas, she will no longer be able to stand up for her memory, and everyone else, most likely, has nothing to do with this.

However, it would be quite interesting to trace in whose evil brain the idea of preserving the honoured director memory in the Lopukhins’ estate was born? It’s not an idle question. After all, Irina Antonova’s life was not a bed of roses. It was the same for the whole generation of those who survived the war, post-war reconstruction, and did not dodge the heavy nationwide burden. But 2013 became a special period of life for Antonova in modern Russia. On April 11 of that year, Antonova was appointed the chief curator of state museums in Russia. At first sight, she was entrusted with honourable public service. In fact, it was preparation for her removal from the management of the museum. Perhaps realizing that this was her last chance, Antonova expressed her long-standing dream publicly during a direct line with Putin. She wanted to recreate the capital’s museum of Western art destroyed under Stalin. After the museum’s destruction for ideological reasons, its incalculable collection of Impressionist paintings was divided between the Hermitage and the Pushkin Museum. Antonova proposed to combine these parts of the collection in the Golitsins’ estate in the capital.

At a press conference dedicated to this initiative, Irina Aleksandrovna said: “Museums must not be destroyed.”

The Director of the Hermitage responded immediately. His reaction was not just negative. Piotrovsky spoke so sharply that it seemed to me that Antonova was stunned by the tone of his comment. The discussion of her initiative was turned into a squabble.

The president did not reject Antonova’s initiative. Instead, he offered to discuss it within the museum community and promised to agree with any decision made. So Antonova had to be stopped immediately. And she was stopped. Irina Aleksandrovna was removed from her post as the Pushkin State Museum of Fine Arts director with the wording “by her own free will” by order of the Minister of Culture Vladimir Medinsky on July 1st, 2013. Medinsky rejected the candidates proposed by Antonova for the place of director of the museum. Apparently, in order to somehow smooth out the acute situation, Antonova was appointed president of the Pushkin Museum.

But it was not the end, even after Irina Alexandrovna passed away. Contrary to Antonova’s position on the inadmissibility of the museums’ destruction, it was decided to immortalize her memory on the site of the destroyed museum. It’s blasphemy, isn’t it?

It is clear that the Roerich communities won’t accept any other decision except for the reconstruction of the Roerichs’ public museum in the Lopukhins ‘estate.

No, the Roerichs followers will not oppose perpetuating the memory of Antonova as such. But the former director’s ill-wishers will take pleasure and enjoy their revenge. And the “Lopukhins’ estate: Roerich or Antonova” theme will become the subject of public attention over and over again.

But if we digress from this specific situation for a moment and ask the question: what is the main thing in preserving the memory of the head of a large museum? What can be considered the main result of his activities? I want to say a lot in answer to this question because the museum business is not an easy one. But still, something important can be extracted in each period of history. I think that in our time, when everything has become very marketable, and even the cultural institution has not escaped the mercantile spirit, the main merit of the head of the museum is the preservation of museum funds. When Irina Antonova was director of the Pushkin State Museum of Fine Arts, there were no scandals connected with the collections’ safety. There was no fire that struck the brain and the centre of the museum – the accounting department with its inventory books, documents on the custody, and collections. It happened later when Antonova was already in an honourable discharge.

By the way, it is worth mentioning that the same criteria apply to other museum leaders. I want to say something special about Mikhail Piotrovsky – the main memory left for him for centuries will be the act of a check of the Hermitage funds by the Accounts Chamber of the Russian Federation. Even if the Ministry of Culture has some other considerations on this.

By the way, Irina Antonova, being a very well-deserved and authoritative person, could afford to speak frankly about how the management of museum affairs in Russia is carried out. In early December last year, after Irina Antonova passed away, an interview was published in “Sobesednik” journal. She spoke about the activities of the Ministry of Culture:

Well, what else can we say? The quality of management is equal to the quality of their decisions. And the memory of Irina Antonova herself, alas, fell into their millstones. Think about it: the decision to place an exposition about the life and work of Irina Antonova in the Lopukhins’ estate is either a dubious honour, outright stupidity, or still an act of refined revenge.